Implications on Financial Flows after COP26 – A Board Perspective. 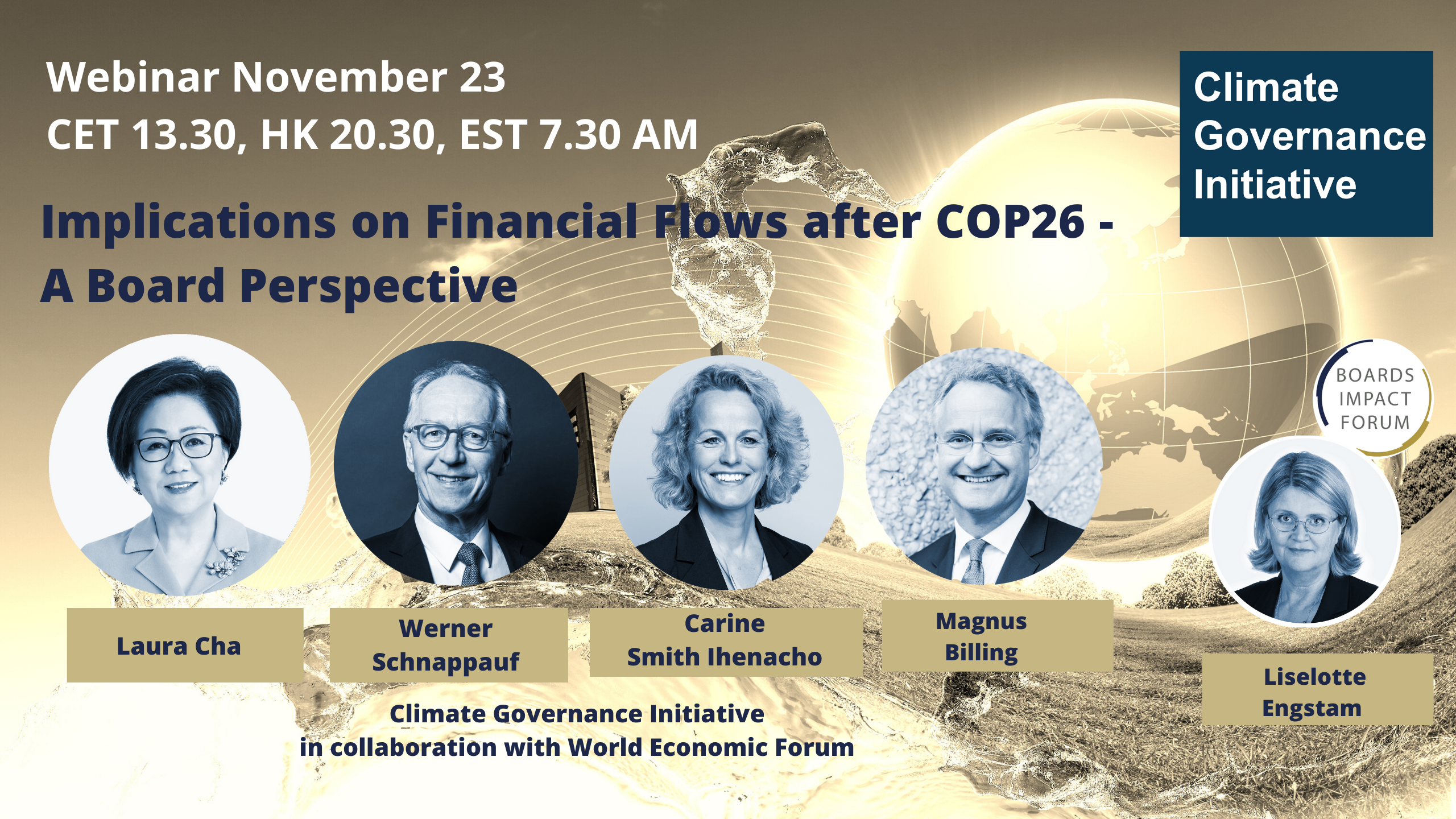 Implications on Financial Flows after COP26 – A Board Perspective.

Many countries have put forward ambitious 2030 emissions reduction targets (NDCs) that align with reaching net zero by the middle of the century, and business has a critical role to the low carbon transition. At COP26, international financial institutions are expected to be to redirect trillions in private and public sector finance to support the global adaptation and mitigation plan.

As the governing body of companies, boards will need to understand how they best can support their companies to attract finance going forward. This seminar will explore the implications on financial flows for companies after COP26.

• What will investors and creditors demand of businesses, in light of climate change and the conclusions from the COP26 meeting?

• What new financial flows and trends are emerging?

• What can companies and boards do to meet new requirements?

• What are the changing expectations on boards, and what good practices are emerging?

• What will happen to those companies that cannot attract finance? Is divestiture the answer?

On November 23 at 13.30 CET, 20:30 HK, 7.30 AM EST The Climate Governance Initiative in collaboration with World Economic Forum invites you to a one-hour webinar discussing Implications on financial flows after COP26 – a board perspective. The webinar is organized by the Nordic Chapter, Boards Impact Forum.

• Werner Schnappauf – Chair of the German Council for Sustainable Development, Senior Advisor to Bank of America, Partner Graf von Westfalen, Former Member of the Supervisory Board of Allianz Deutschland, State Minister for Environmental Protection and CEO of the Federation of German Industries.

• Moderator: Liselotte Engstam, Board member of the Climate Governance Initiative in collaboration with World Economic Forum & Chair of the Nordic Chapter Boards Impact Forum. Chair and NED of listed and private companies.The session is open to the global network and convene board members, regulators, experts, academia, and other corporate governance leaders, with the aim to be relevant to boards of directors enabling them to act upon the risks and opportunities that the climate emergency poses to the long-term resilience and business success of their companies.

About The Climate Governance Initiative (CGI) : CGI was established to build a community of non-executive directors who understand and can position the climate challenge with their board colleagues. Decisions made at the board-level have a significant impact on the climate challenge as corporations are responsible for generating sizeable emissions of carbon. In collaboration with a growing number of chapters around the world, the CGI helps non-executive directors put the World Economic Forum’s Climate Governance Principles into practice. It was launched in 2019 and is part of the World Economic Forum’s Climate Action Platform.

Laura is chairman of Hong Kong Exchanges and Clearing Ltd and a Senior International Advisor of Foundation Asset Management AB. She is non-executive board director of Unilever. She is also a member of the Executive Council of HKSAR Government.

Laura became the first person outside Mainland China to join the Chinese Central Government at the vice-ministerial rank when she was appointed as vice chairman of the China Securities Regulatory Commission in 2001. She stayed in that post until 2004. Previously, she worked in the Securities and Futures Commission in Hong Kong from 1991 to 2000. Laura was also an independent non-executive director of HSBC Holdings plc between 2011 and 2021.

Dr Werner Schnappauf is partner at the law firm Graf von Westphalen and CEO of Shcnappauf Consulting. Among his clients is Bank of America to which he is senior advisor since 2011. In his decades-long career, Dr Schnappauf has acquired broad experience in the fields of economy, ecology and sustainability. He served as Bavarian State Minister for Environmental Protection, CEO of the Federation of German Industries (BDI) and was a member of the Federal Assembly.

He sat on the Supervisory Board of Allianz Deutschland and currently serves on the Board of Trustees for both the Allianz Environment Foundation (Allianz Umweltstiftung) and the University of Munic’s ifo Institute. At Bucerius Law School in Hamburg, he presides over the Circle on Energy Law and Policy. In 2016, Chancellor Angela Merkel appointed Dr Schnappauf to the German Council for Sustainable Development in 2020, he was elected as the Council’s Chair.

Carine Smith Ihenacho is responsible for the governance and compliance area, which includes ownership and responsible investment activities, control and operational risk, compliance and legal services at Norges Bank Investment Management. Prior to joining Norges Bank Investment Management, Ms Ihenacho was Vice President Legal and Chief Compliance Officer in Equinor ASA. She has more than 20 years’ experience as a lawyer, working in both financials and the energy industry, as well as in law firms. She also has extensive board experience.

Magnus Billing is the CEO of the occupational pension company Alecta, with appr 130 USD assets under management and is owned by approximately 2,6 million private customers and 35,000 corporate clients. Prior to joining Alecta, Magnus Billing was the CEO NASDAQ Nordics and Baltic Markets, and has been working in the financial industry since early 2001.

Magnus Billing was a member of the High-Level Expert Group (HLEG) on sustainable finance that the EU Commission appointed and gave the task to come up with recommendations for how to create a sustainable EU financial market. Magnus Billing is chairman of the Board of Directors for Stockholm Sustainable Finance Center. The center was established and is supported by the Swedish Government, Stockholm School of Economics and Stockholm Environment Institute.

Magnus Billing was previously a member of the NASDAQ Listing Committee, secretary of the Board of Directors, NASDAQ Nordic Foundation, and served as director of Federation of European Securities Exchanges, Swedish House of Finance and as an alternate director of the Swedish Corporate Governance Code Board of Directors. He holds a degree in law from Stockholm University.

Liselotte Engstam is a Member of the Global Governing board of the Climate Governance Initiative in collaboration with World Economic Forum, and Chair of the Nordic chapter: Boards Impact Forum. She is a Chair at FCG Group (priv), a Non-Executive Director at TietoEvry (publ), Transtema (publ), Zalaris (publ), Ografy (priv) and at the Academic Foundation IMIT.

Engstam is the founder of Digoshen, a Think Tank hosting board membership networks and programs, is an affiliated academic researcher on board topics, and co-author of several books about boards.

She has a background from international executive leadership positions in major European, American, and Indian companies in technology, engineering, and professional services sectors.

Engstam holds an M.Sc. in Engineering and Sustainability from Chalmers University of Technology, an international board certification (IDP-C) from INSEAD, is a Fellow at the Institute of Coaching, Harvard Medical School, and was appointed one of 2021 Modern Governance Top 100 professionals in the world.